I don’t know if it really came across there, but that was meant to be a spooky sort of ghost noise in the post title. Just go with it.

So last Sunday, the UWO Early Music Ensemble (the recorder quartet that I play in) got together for a Movie Night to eat tasty food and watch a documentary on Carlo Gesualdo. Actually, I’m going to go ahead and say that it was a “documentary” because dear, old Werner Herzog definitely took some wacky liberties here – not that Gesualdo wasn’t a super crazy guy, but Werner really took it to the next level. In the words of Jason Mantzoukas, this movie was bonkers. Any description I give you won’t do it justice whatsoever, but I think if you have a quick Google around, you can probably track it down on a website that rhymes with Shoe…Lube, I guess?

But it’s a fun group of folks (the flute professor and fellow Star Wars Minute fan who plays alto; a pre-med pianist who plays tenor; an oboist who plays the soprano; and yours truly floundering around on bass) and we were joined by Drew and one of the vocal professors. We had lentil sloppy joes, a butternut pasta, a spicy corn dip, and pumpkin blondies (yes, I’m a basic bitch and love my pumpkin baked goods in the fall).

And I just realized that I kept putting off taking a picture of the blondes and now it’s too late – they’re all gone! Well, just use your imaginations…

I was actually a little disappointed in how these turned out – they were dense and fudge in texture, like a brownie, but obviously had the (very strong) flavor of pumpkin. Turns out I like my pumpkin items not so…moist (I probably could have baked them a skosh longer. I also put in pecans and I definitely wish I hadn’t – nuts have no place in baked goods. There. I said it. I’d say it again if I had to. So a bit of a bust if you ask me, but I think people enjoyed them. I was trying to resist, but I may just have to go back to Paula Deen’s pumpkin bars – they may be racist, but they’re soooooo tasty! 😦

I asked for (and got) Gone Girl last Christmas. Once I found out they were going to be making a movie of it, I thought I really should get to it soon. When the movie came out, I flew through it, desperate to finish it without being spoiled for anything. And I made it!

And I really liked it. There’s just so much going on – very twisty – that I can’t really talk about it too much without giving something away, so I’ll pretty much just leave it at that. I will weigh in on the somewhat controversial (so I’ve heard – again, I was desperately avoiding being spoiled so I didn’t actually click on any of the articles expressing outrage over the ending) and say that I thought it worked. I thought it was a good way of leaving things – maybe not very satisfying, but very real for everyone involved – at any rate, I definitely did not feel an urge to fling it through the nearest window as I’ve heard other people have.

Turns out Aisha Tyler, along with being a great comedian, a wonderful actress (voice and otherwise), and an official Tall Girl, is also a very talented interviewer a la Chris Hardwick. She has thoughtful conversations with actors and comedians…I can’t really think of anything else to say because I’m so excited to tell you about the next podcast, but still, go check this one out – she’s good! 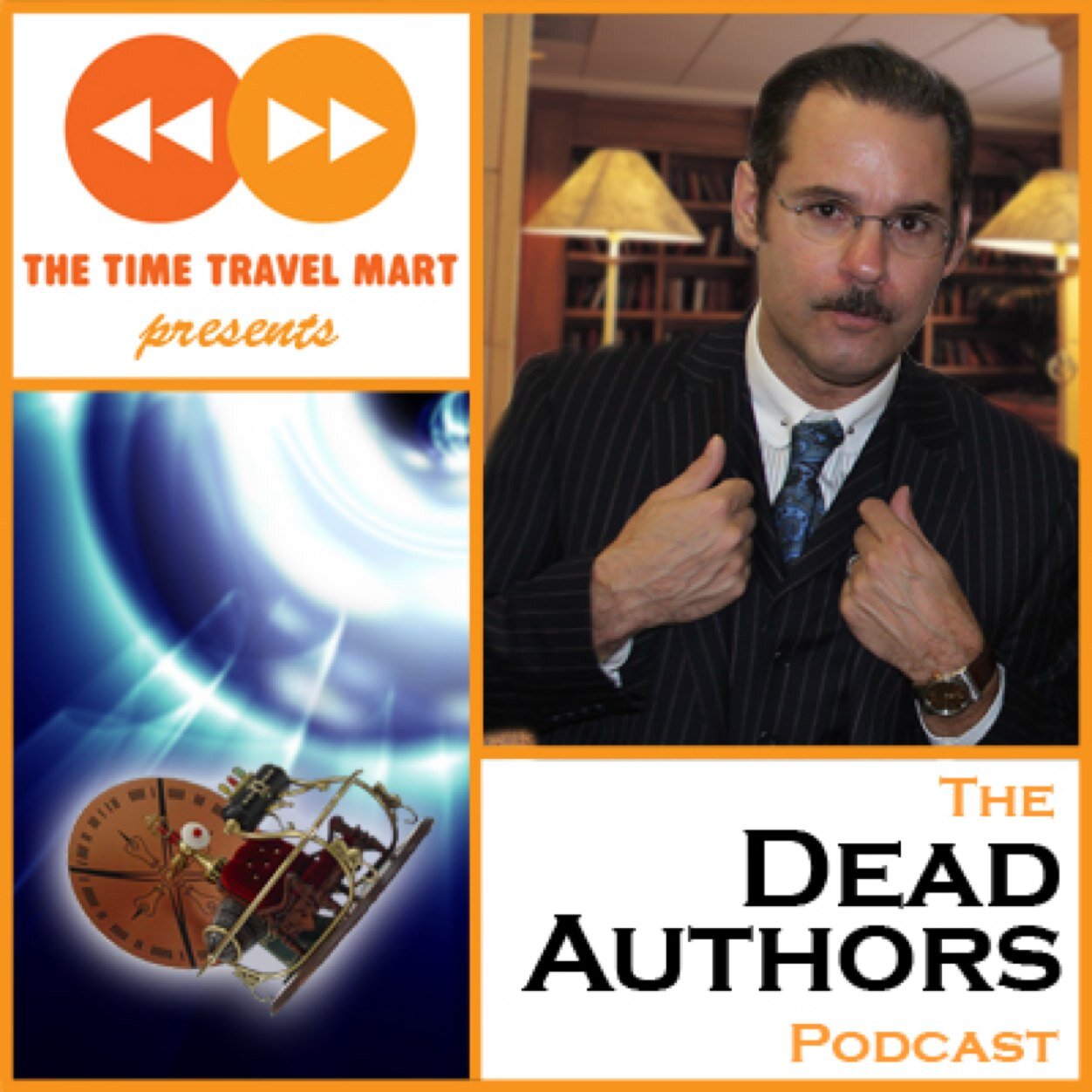 Holy cats, this is my new favorite podcast! It’s funny and it makes me feel smart because I get the jokes! So the premise is that H.G. Wells (Paul F. Tompkins [aka Werner Herzog on the occasional Doug Loves Movies]) uses his time machine to travel around and bring various dead authors, most of whom are gloriously unhinged, to the present day for a chat. The dead authors are played by various comedians, such as James Adomian as a raving Nietsche, Brian Stack as a gleefully perverse P.G. Wodehouse, Jen Kirkman as a witty, tipsy Dorothy Parker, Scott Aukerman as a bad boy Benjamin Franklin, and Andy Richter as a flustered Emily Dickinson — and the list goes on! I was listening to the P.G. Wodehouse episode in the kitchen the other day and I was laughing so hard that Drew had to come check on me! I have a lot of catching up to do, but the way I’m tearing through episodes, it won’t take me long. It’s definitely not for educational purposes, so if you’re looking to actually learn something, you won’t find it here, but otherwise it’s a hoot!

So while I was in Colorado, I finally caved and drank the Kool-Aid that is Louise Penny’s Inspector Gamache series, but the only one the bookshop had was How the Light Gets In which is, like, the ninth one in the series, I think? Well, I was finally able to start back at the beginning and get to know everyone in order!

I can’t speak much to the actual mystery that’s being solved here as it is an engrossing, but fairly standard mystery. The real stand-out in Louise Penny’s books (or at least the two I’ve read so far) is the large cast of characters and the village of Three Pines. While I was able to get to know everyone during How the Light Gets In it’s clear that this is more of an introductory version of everyone. And this one actually made me kind of like Clara Morrow who was my least favorite character from the ninth one. Inspector Gamache is smart but not infallible and his supporting cast are all individuals with their own personalities and back stories. I can’t wait to keep reading about Gamache and what else happens to Three Pines and its residents!

One Good Earl Deserves a Lover by Sarah MacLean

This is the second book in Sarah MacLean’s Rule of Scoundrels series. I’m sure I read the first one, but I really don’t remember it at all! But this one was good, so I bet that one was good, too. The heroine is plucky and likable and the hero is smart, sexy, and only a teensy bit brooding. There’s some drama, but not too much – and super, amazing sexual tension! I was reading this in the car on the way back from Laura and Tyler’s wedding and at one point Drew tried to talk to me and I was like “Can’t. Talk. Finally got to. The first sex scene.” He was very impressed that it was a good 2/3 into the book before things finally got a bit heated – and so was I! I’m not super psyched for the Temple’s story – I don’t like him as much as I like the other three scoundrels. But I’m SUPER psyched for the fourth one – Chase’s story…I want to read eeeeeeet!

Last weekend, Drew and I had a whirlwind visit to Champaign to celebrate our friends’ (Laura and Tyler) wedding! We headed down on Friday afternoon after work and stayed with my parents that night and then headed in to CU for brunch with my parents and Grandparents at the Original Pancake House. Yay for pumpkin pancakes! So tasty. I miss that place.

Then I hung out at Liz’s place while we got ready and Drew went to hang out at the U of I’s music library for a little bit. I was even adventurous and managed to put my hair UP for the occasion, thanks to this tutorial courtesy of The Small Things Blog. Then it was off to the church for Laura and Tyler’s ceremony. It was really a lovely ceremony – short but sweet. Tyler looked handsome, Laura looked gorgeous, and I totally cried! I was okay until they started back down the aisle at the end of the ceremony and they looked so happy together – they got me!

After hanging out in the hotel room we were sharing with Scott and Rachel for a little bit, it was time for the reception. Time to party!

Congratulations to the happy couple – we’re so glad we got to celebrate with you!

Love it! And I’m not just saying that because Karen Gillan and I are both members of the Tall Girl Club. It may have a stupid name and I’m really not sure how they’re going to stretch the whole My Fair Lady premise over multiple years, but Eliza is likable (despite being shallow and self-centered) and Henry is likable (despite being a bit of a fuddy-duddy) and they have really good chemistry. It doesn’t hurt that Karen Gillan is pretty on the eyes 😉 Definitely the best pilot I’ve seen so far – it did a great job of introducing the premise and the characters without being boring or feeling like a set-up. Loved it!

The yooje (How do you spell the shortened, obnoxious version of ‘usual’?), but still made me laugh. I wish it wouldn’t keep winning Emmys, but it’s still a really enjoyable show. I’m looking forward to where they go this season!

I’ve been missing Smallville lately – and I think I may have just found a replacement. They’re not in high school, but I think this’ll do. I don’t know a single thing about the Flash,so I can’t speak to how accurate this show is regarding his origin story (or anything else, really). The lead actor is no Tom Welling – the Flash is clearly from the Andrew Garfield school of superheroes – but he seems like he has a good mix of curiosity and courage and nobility that I think will work just fine. The pilot gives us the Flash’s origin story and sets up the show for the standard Monster of the Week-style episodes as well as a longer overarching plot line in potential villain or mentor Dr. Wells (played by Tom Cavanough who I really like) AND the unattainable, Lana-Lang-esque Iris. I think this’ll be a fun one! (This show exists in the same universe as the CW’s Green Arrow – anyone out there know if I need to watch that one, too? Is it any good?)

I had read mixed reviews of this one so I hadn’t planned on checking it out, but then Ragen said she really enjoyed it so I gave it a watch! I haven’t quite made up my mind yet – it seemed cute enough, the characters likable enough, but the jury’s’ still out at the moment. I’ll keep you posted!

It took me a while to get past the animal/human-hybrid characters on this show – they freaked me out something awful! But now that I’m used to it, I’m hooked. It’s full of people I adore – Will Arnett, Alison Brie, Amy Sedaris, Patton Oswalt, Aaron Paul…the list goes on! It’s funny AND it has a great theme song. Love. It.

I like Kate Walsh even though I never watched Grey’s Anatomy or Private Practice. At any rate, I’m glad to see her back on TV and I hope this one lasts because I really liked her character and her great supporting cast. I’m interested to see where this one goes!